City Guide to Living in San Francisco and Its Neighborhoods

Wondering what it's like to live in San Francisco? There’s more than just great weather and the Golden Gate Bridge. Learn about the most popular neighborhoods, cost of living and more.

After living in San Francisco, many have claimed to have left their heart in the storied city. In a state as adventurous and varied as California, the Bay Area is known as a world-class destination for travelers. There’s plenty to see and enjoy––from the Golden Gate Bridge and Lombard Street to Fisherman’s Wharf and the Painted Ladies. But the city is also home to much more than tourist attractions.

San Francisco is a city with rich history, Michelin-starred restaurants and art and culture.

Living in San Francisco: What to expect

San Francisco often ranks No. 1 on various Best Places to Live in California lists. The job market in San Francisco is robust. The median income is higher than the national average, making up some of the difference in the cost of living.

The area attracts young professionals, and a good portion of the residents are single. This makes San Francisco feel youthful and energetic. It’s a good place to meet new people and get involved in activities.

The city is walkable, though much of the terrain is hilly. Tourists on foot take in sites like Alcatraz, Golden Gate Park, Fisherman’s Wharf and Lands End.

Walk Score ranks the city as an 80. You can live here without a car and get most of your errands done on foot. San Francisco has many public transit offerings, and it’s bicycle-friendly. It’s listed as one of the most walkable cities in the United States, along with Boston and New York, but San Francisco’s weather is more moderate year-round.

Because of the hilly landscape, you can expect to walk up and down steep inclines often. As with most cities, some areas are more pedestrian-friendly than others. Downtown, Chinatown and the Tenderloin Area are ranked as the most walkable neighborhoods in San Francisco.

According to US News & World Report, the following are the top schools in San Francisco.

The average commute time in San Francisco is about seven minutes longer than the national average. A higher percentage of residents walk, ride a bike or take public transportation. Those modes of transport take longer than driving, but all promote less congestion in the city. they’re also far healthier. Many residents find the added commute time gives them a few minutes more to read or listen to their favorite podcast.

San Francisco has year-round moderate temperatures. The warmest stretch lasts from June through October when the temperatures average between 58 and 72 degrees. December and January are the coldest months, averaging 46 to 57 degrees. Temperatures rarely fall below 38 degrees or rise above 82 degrees.

San Francisco is famous for a few things: the Golden Gate Bridge, the cable cars and the fog. The dense fog is such a large part of living in San Francisco that locals have actually given the fog a name: “Karl”. There are cloudy days and rainfall in San Francisco. The time between the end of fall, in October, to the spring produces the most cloud cover. The clearest skies come in August. 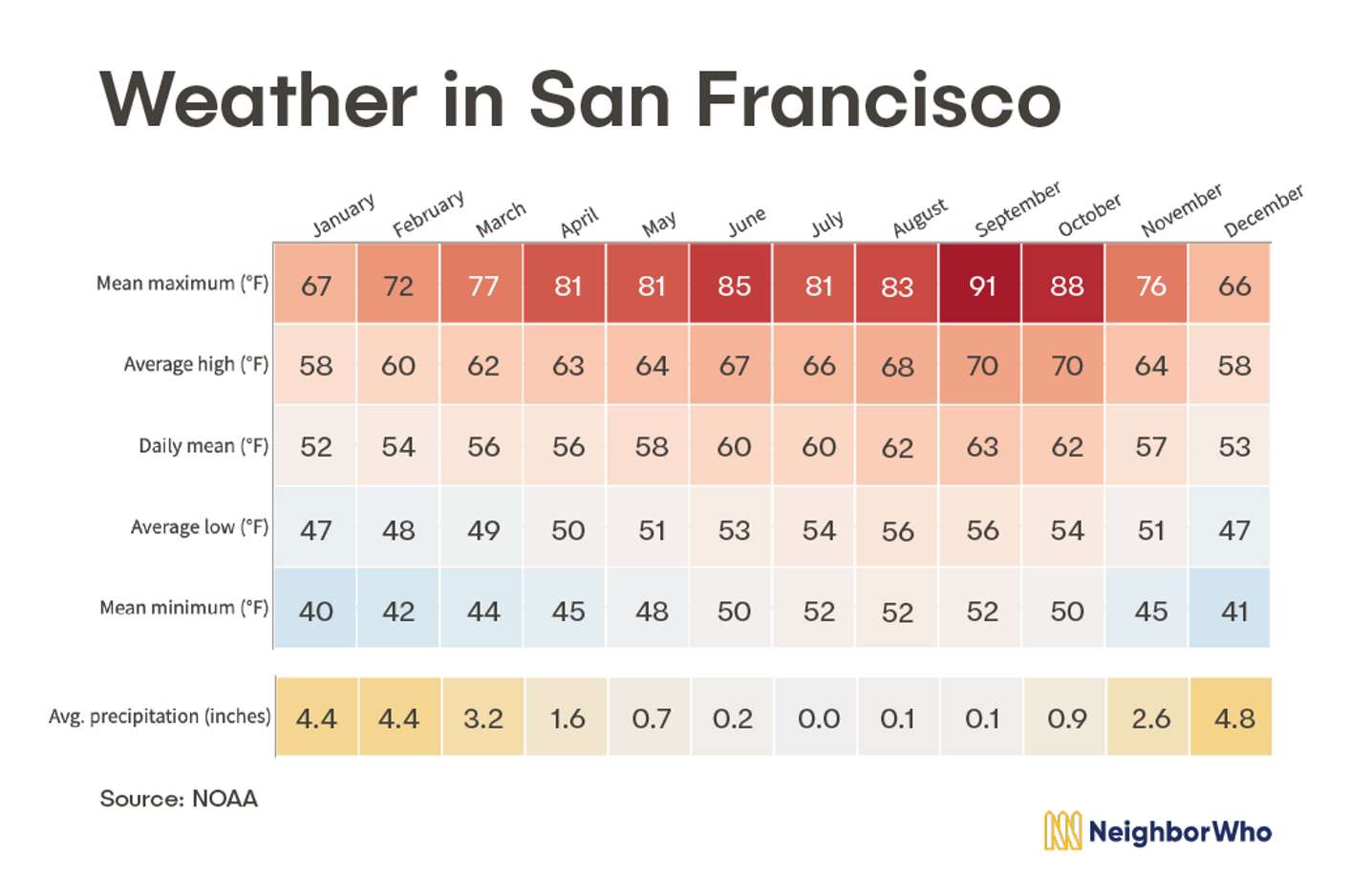 San Francisco has a high crime rate compared with other cities across the country and state. Its crime rate is 148% higher than the national average, according to FBI crime data. Property crime is the most common crime, with residents facing a 1-in-19 chance of being a victim. The odds of being a victim of a violent crime is 1 in 150. 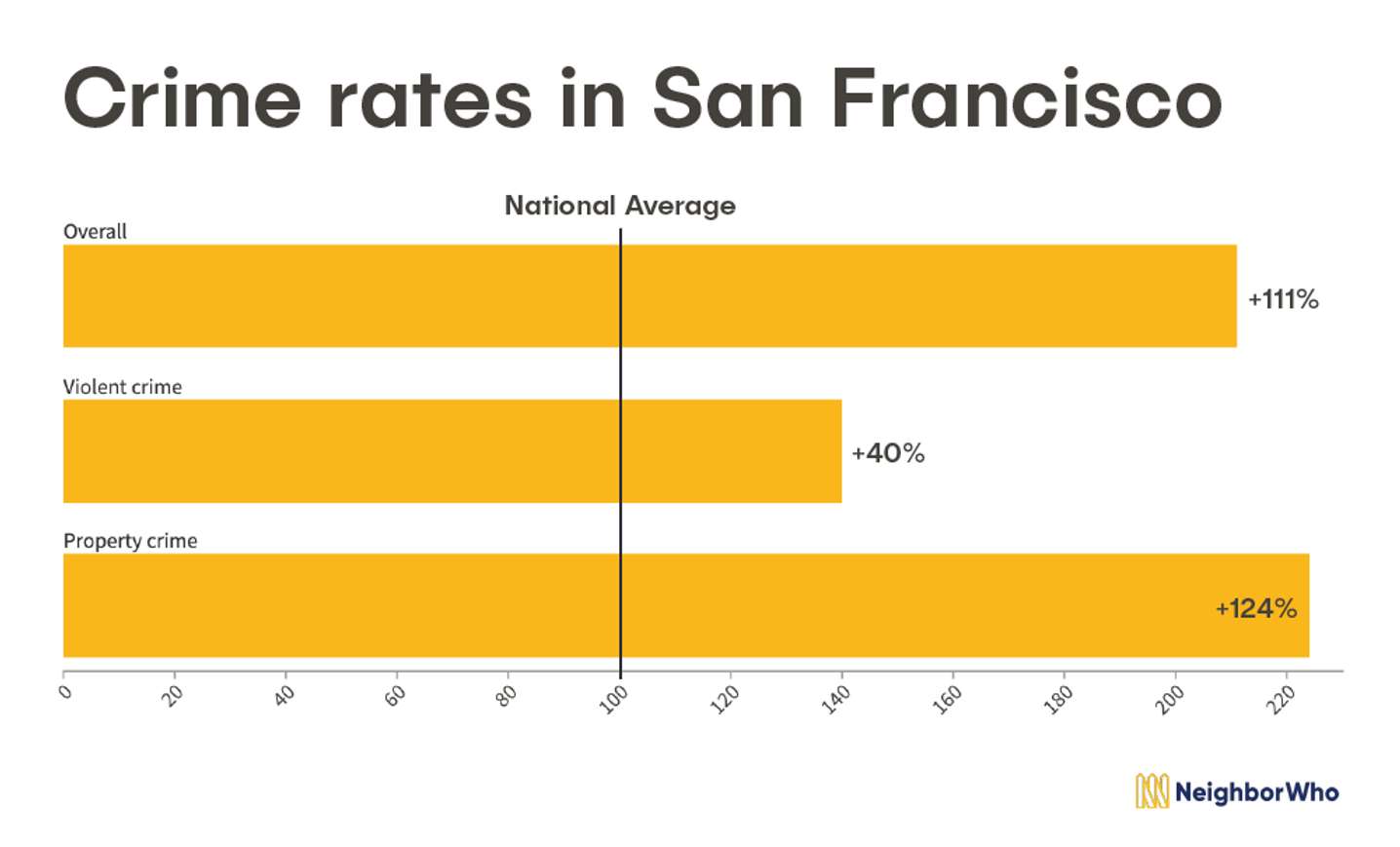 San Francisco is the fourth-largest city in California by population, with 883,255 residents. According to the 2010 census, San Francisco had just more than 805,000 residents, which means the city has grown by nearly 10% in the past decade.

During the California Gold Rush of the 1840s, San Francisco experienced its largest recorded population boom. Since 1849, the population has continued to grow, with notable declines in the 1960s and 1980s. After each decline, the population came back and continued to grow through subsequent decades. San Francisco is currently one of the most populated areas for its geographic size in the country––second only to New York City. 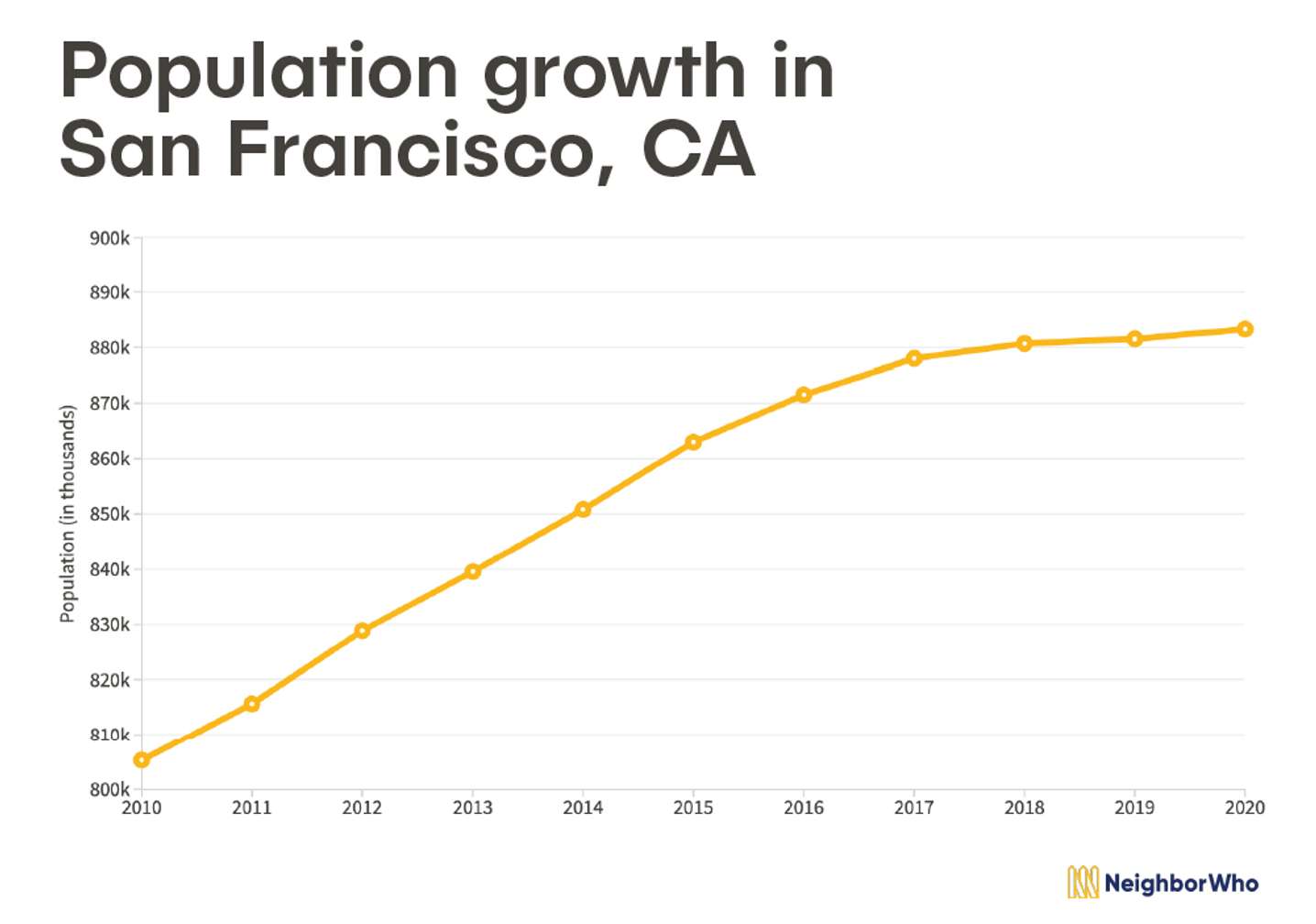 Cost of living in San Francisco

The cost of living in San Francisco, when you don’t include mortgage or rent, is lower than New York City but higher than the national average.

The monthly cost of living for a single person averages a little more than $1,250 per month without rent. For a family of four, the average is more than $4,500 per month.

To put that in perspective, the national median household income for the same year was $69,560. So, the cost of living in San Francisco is higher than average but the median income is nearly double that of the national average. 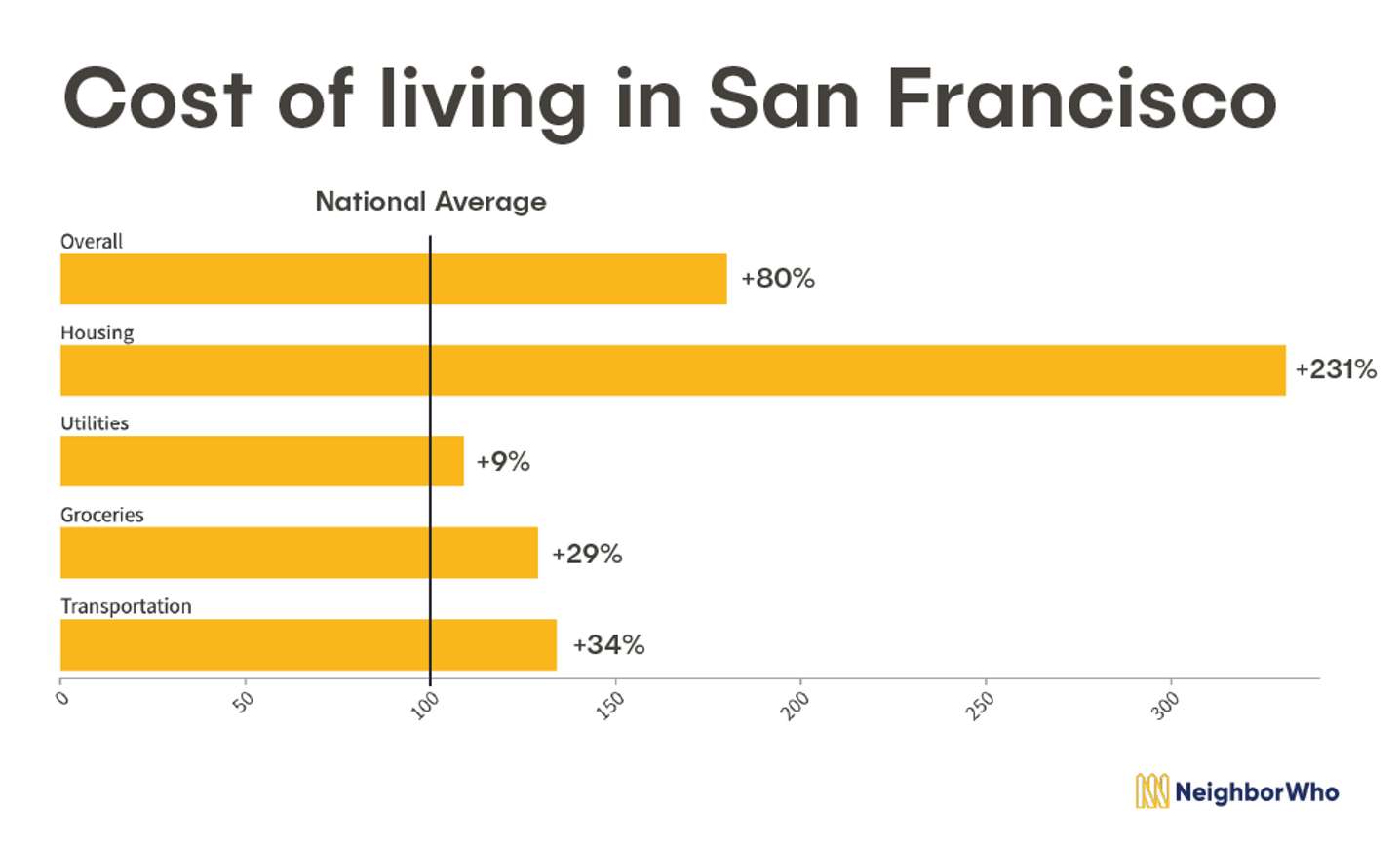 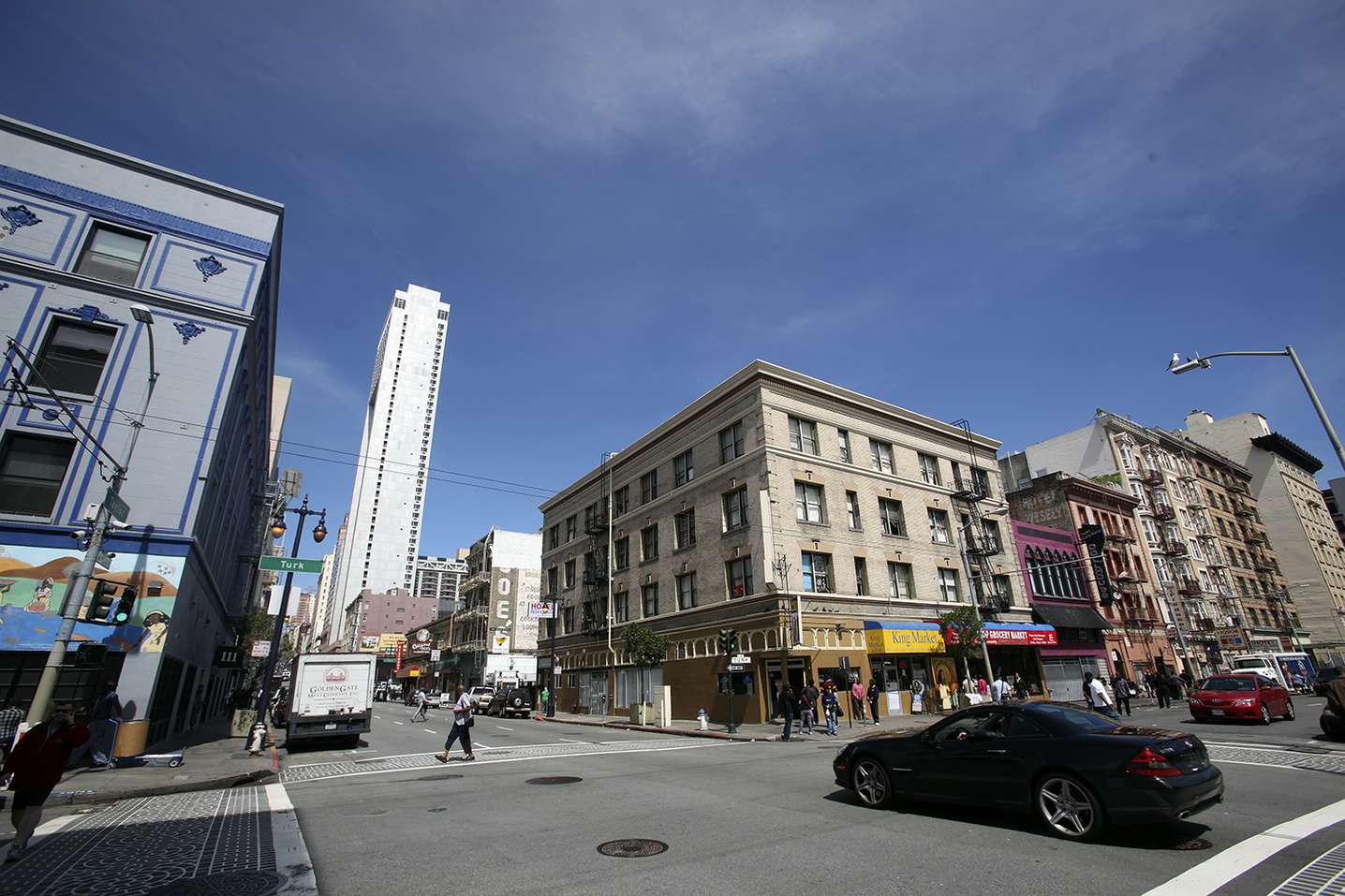 The Tenderloin is one of the more affordable areas in San Francisco. It’s surrounded by more upscale areas and home to live music, art and Vietnamese cuisine.

The Tenderloin is located in the heart of downtown San Francisco. It’s south of Union Square, which is the shopping district, and north of the Civic Center district, known as the business district. This is the oldest Chinatown in the US, and it has the largest Chinese population outside of China. It is a world-famous tourist attraction and also a thriving community. Nob Hill is an old community of wealth. If you want to see historical mansions and the best of American opulence, you can find that here. The area is home to some of the finest restaurants and hotels the city has to offer.

Nob Hill is located just west of Chinatown. Russian Hill lies directly north of this neighborhood, with Polk Gulch to the west and the shopping and office districts to the south. 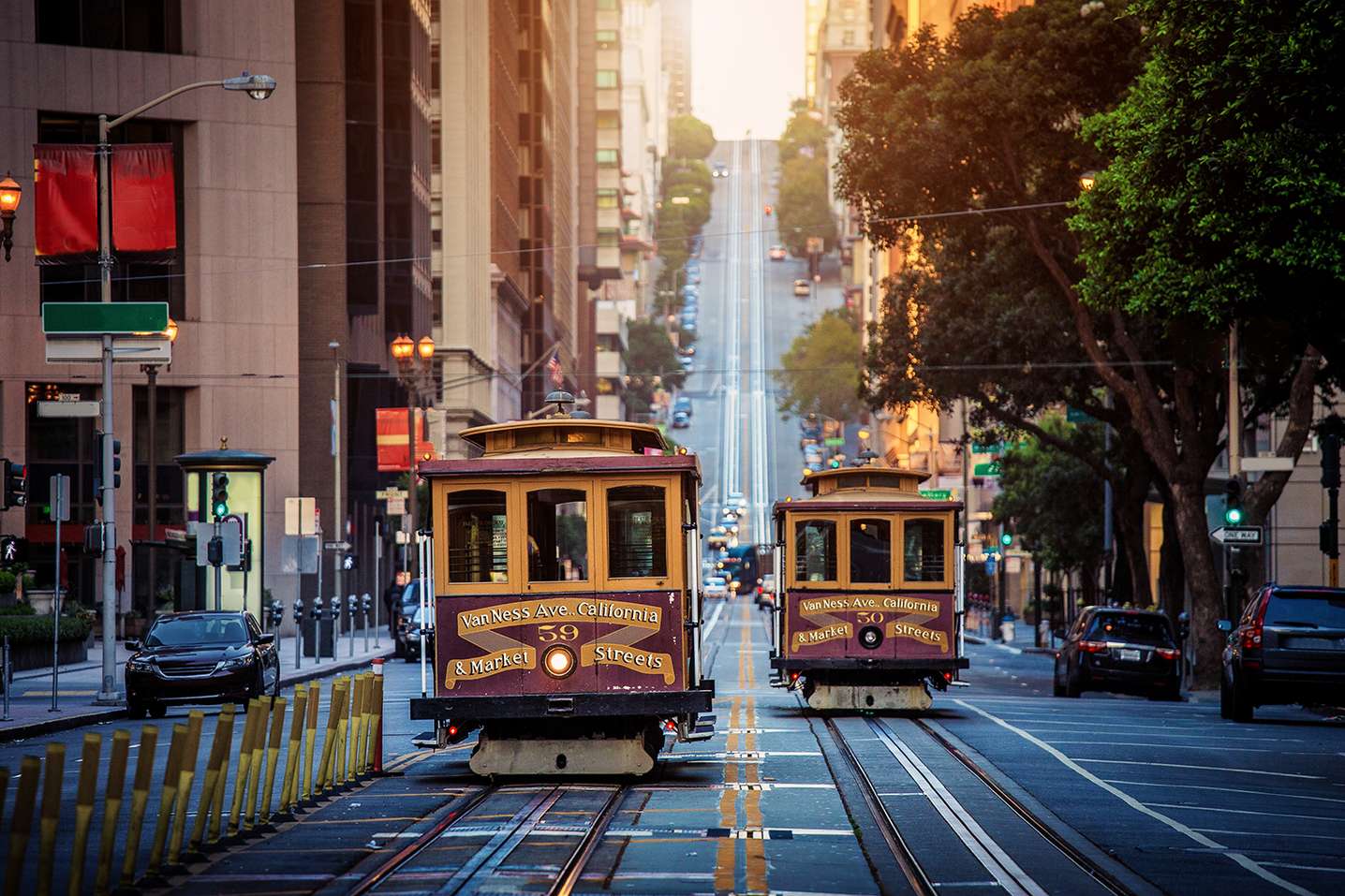 Downtown San Francisco is home to the Financial District and also Union Square. This is a major tourist area because it has a large collection of shopping venues. You can find small boutiques, large department stores and a variety of bars and restaurants. 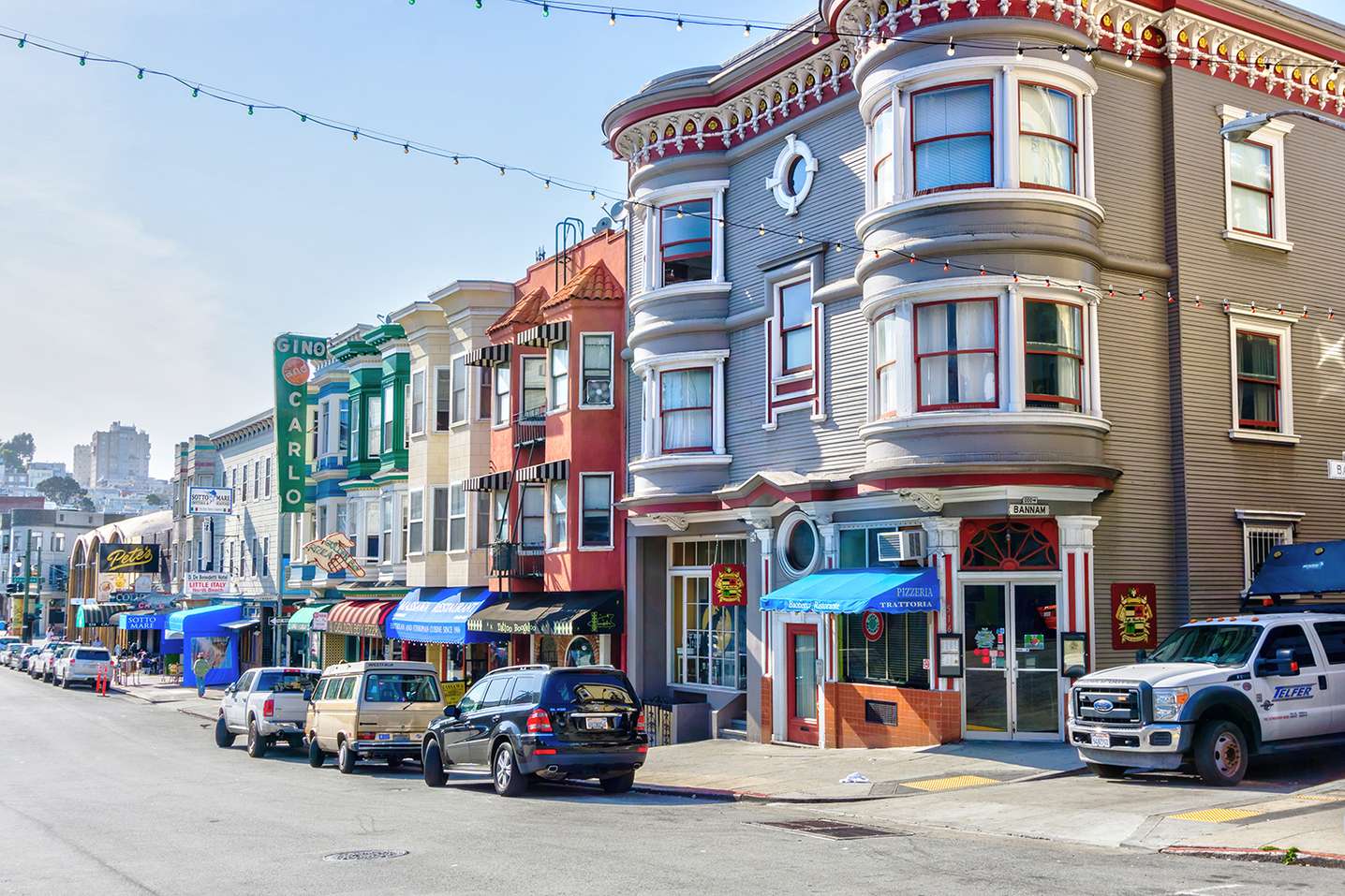 North Beach is San Francisco’s version of Little Italy. There are great cafes and restaurants with traditional red-checked tablecloths. The area is home to many of the city’s Italian and Chinese residents.

North Beach is bordered by Fisherman’s Wharf to the north, Telegraph Hill to the east, Russian Hill to the west, and Jackson Square, the Financial District, and Chinatown to the south.

The median home price in San Francisco in 2020 was more than $1.1 million, making it one of the most expensive home markets in the country. The average cost of housing was $1,000 per square foot.

The median price of a home in San Francisco has more than doubled since 2014.

Like most places, the pandemic had an impact on the housing market in San Francisco. Many reports predicted a mass exodus from the area because businesses closed and residents working for local tech companies went fully remote through the pandemic.

Some of those people relocated outside the city because they wanted open spaces. But that was mostly a temporary situation. As housing prices skyrocketed and businesses reopened, the housing market in San Francisco came back.

“If you have a well-priced single-family home, it’s going to go immediately, no question,” said Michael Bellings, a real estate agent and partner with the Bellings Brothers Real Estate Team. “Everyone wants to buy a house in San Francisco and there aren’t that many of them.”

Moving to San Francisco from another area of the country can be costly. The price of movers and shipping containers will vary, depending on where you’re relocating from. You can also save some money if you rent a truck or downsize and move yourself.